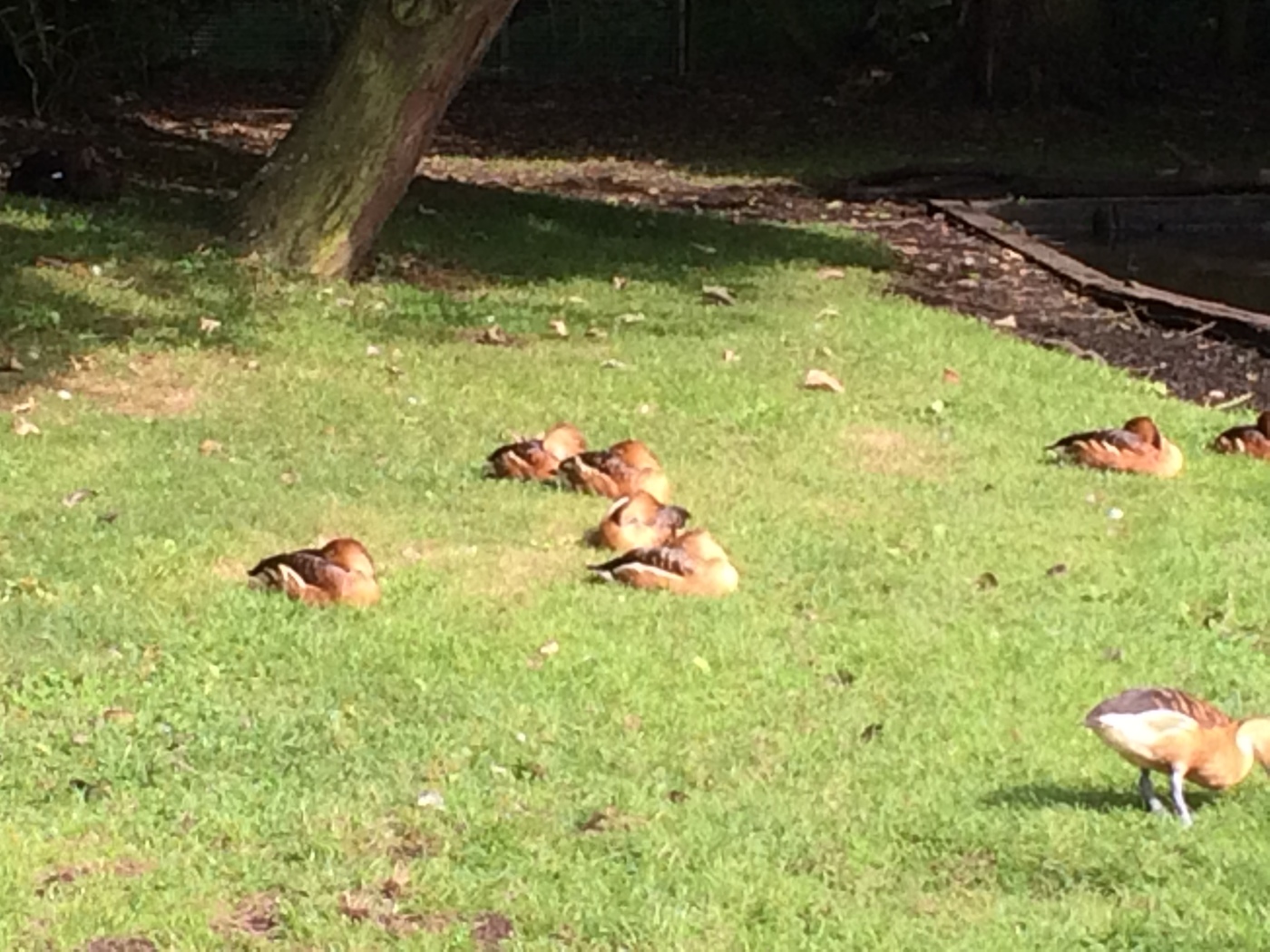 I went with a neutral, non-attention-grabbing wording for my headline, but I can tell you that it was a big thing for me to go the theatre. I never go to the theatre! I used to, but I learned 15 years ago that directors will always, always find an opportunity for a character to pull out a gun and fire it. Doesn’t matter what the play is, they will shoehorn it in. I’ve seen it happen in a Shakespeare comedy. There was no need for it, it was just a way for the character to stop everybody talking at once. He could have achieved the same with just raising his voice or clapping his hands. But no, out comes his pistol and BANG! I jump 3 feet in the air and spend the rest of the play with my fingers in my ears. After that I decided not to risk it any more, so I just didn’t go to the theatre. It wasn’t my passion anyway, so it wasn’t a huge sacrifice.

But for this one, I was sure it was safe to go back in the water, because the play was ‘The Duck’, written by Rhiannon Lloyd-Williams, who is none other than the fabulous Rhi, whose blog I have been following…can it really be years now? It must be. I knew about the play from Rhi’s blog, but I’m not really up for travelling very far to go to a play. When I saw however that it was going to be on in Oxford, which is less than 20 miles away from where I live, I knew that this was my opportunity. So I bought a ticket and went.

I was a bit nervous, but on the whole I was looking forward to it, despite the departure from routine. The play was at the Old Fire Station (you can check them out online), and I knew exactly where that was, so no problem there. I went in, collected my ticket, and hung around the foyer. There were quite a few other people there, but it was like being at the worst kind of party, where you don’t know anyone, but others clearly know each other. The situation was made even more awkward by the fact that I recognised some people: Rhi herself, Sonia Boué, and a tall woman with red hair, who I thought was Alexandra Forshaw, but I wasn’t sure. (Turned out it was her.)

It was only when I was approached by a chap who saw me standing there ‘as if ordered but not collected’ (German expression), and asked if I knew anyone. When I explained that I recognised some people without actually knowing them, Sonia heard me and came over. Introductions were quickly made, and both Sonia and Alexandra were so warm and lovely, I felt like being hugged without actually being hugged. So now I had some people to talk to!

‘Here,’ I thought, ‘are some #ActuallyAutistic people I can talk to in real life. Now I will experience the difference to neurotypical interaction, and I will be able to judge whether I get on easier with these people than others.’ The thing is, I didn’t really notice that much difference. It is only when I think about it that I can pinpoint possible differences. One is that there was no sounding-each-other-out. We talked to each other openly straight away. Another was possibly that we went straight into discussing terms like ‘neurodivergent’ and ‘diagnosis’ and what it means and what we think it should mean etc. without having to go through ‘And what do you do?’ kind of small talk. Yes, I thought it was pleasant and easy. Was it more pleasant and easy than talking to neurotypical people? I don’t know. From my feeling, not that much. Of course, I don’t have a lot of experience with talking to people I have nothing in common with. Mostly when I have occasion to talk to strangers, say at conferences or networking meetings (yes! I go to those!), we are all in some way connected to museums, so it is museums we talk about. That is pretty easy, too. And museum people are a pretty homogenous lot anyway. So, my study of autistic versus neurotypical interaction was inconclusive.

Before I talk about the play itself, I have to tell you about the ‘goody bag’ everyone received. 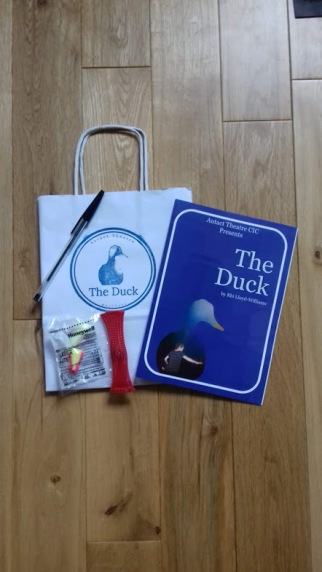 This contained the program, a feedback form, a pen with which to fill in the form, earplugs and a stim toy. Fun! I took the toy out and made use of it immediately. I don’t actually stim a lot, but once I have something in my hands, I find it hard to stop. There was also a list of things to expect, which was hugely helpful, and I wish this sort of thing was available for every play in theatres throughout the land. It was things like telling you how long the play was, that there was no interval, that there would be two instances in which the character shouts, that the performance was not amplified, so that there were no loudspeakers and no danger of feedback. This was information I could use! I had actually thought on my way there ‘I hope they are not using microphones’, so to be reassured on that was a huge deal for me.

So, to the play itself. It has only one character, played by Lucy Theobald. This character is a woman who receives a letter, identifying her as a duck. (For ‘duck’, basically read ‘autistic’.) In the course of the play this woman talks about what it means to be a duck, what it means for her to be a duck, and how her ‘duckedness’ is perceived from the outside. It is really well written (if you know Rhi’s blog, you know she has a way with words.) It was really well performed, too. The character was real and relatable, and likeable. The way she moved, and spoke, was entirely natural and believable. It all worked really well together, the words as they were written, and the way the actor got them across. I think many of the audience were ‘insiders’, i.e. autistic people, but this play is so valuable to present to outsiders. For some to realise that they are ducks themselves, for others, because it explains what it’s like, and better than a straight-faced lecture could do. People relate to stories, and this is a story, albeit a true one.

I don’t feel like writing a straightforward review of the play. I don’t feel I can. Instead, here is how it was for me.

I know that people have said to Rhi after seeing the play that they felt like they had been put on the stage. I didn’t feel like that. I didn’t have the big ‘oh my god, it’s me’ epiphany. After reading autisitc women’s blogs for years, writing one myself, and generally pondering the subject, everything in the play was instantly familiar. Seeing the play didn’t vastly advance my knowledge of autism or change my attitude much. This didn’t make it any less interesting, because the new thing for me was the way it was presented, and for that it was worth going to see it. It was more immediate, and more fun, than reading about it. The play is very funny, but of course not non-stop. And a lot of the time the laughs are laughs of recognition.

Being still uncertain in my self-identification – yes, after all this time I’m still chasing my tail on that – I of course compared myself with the character on stage. Like I said, I didn’t really recognise myself in her, or only in parts. My inner voice kept saying ‘I don’t do that, I’m not like that – can I be autistic if I’m not like that?’ But thinking about it afterwards, I realised that I’m probably just hung up on details. I don’t mind the sound of the fan, I’m entirely used to my bra straps, and patterned cutlery doesn’t bother me. So how can I be like her? Well, perhaps it’s in way I have to walk the long way to work because the short way is past a tyre place which in the past as emitted very loud noises just as I walked past? Or the way I have to leave the office while my colleague eats his lunch because I can’t stand the eating noises? Or the fact that bonfire night is nothing to look forward to but means two weeks of heightened anxiety and suffering? Or the way I hold my breath when passing someone in the street so I don’t have to breathe in their perfume?

One thing I could recognise myself in was the way in which for the character one thought sparked another, and another, and another, and so on, very rapidly. That’s exactly how my brain works as well. In many ways the play was for me like everything else experience-based on autism, like blogs etc. Some of it is like me, some isn’t, and I’m left hanging in the middle. (Which says something about me, not the play.) One thing is certain: I didn’t find the character weird, or strange, or incomprehensible. I knew what she was talking about and where she was coming from. And that probably says something about me as well.

The most important thing I took away from the evening was this: the thought that the spectrum is not linear, but a circle of ducks. They are all different kinds of duck, but they are all ducks. And when you see it like that, I believe that I could be a duck, too.

After the play there was a Q&A session with the author and the performer. The question foremost on my mind was one which someone else asked (clearly I wasn’t the only one who wanted to know!): What is the amazing toy Lucy was playing with as the audience came in, and where can I get one? It’s a thing called magic rings or kinetic bracelet or other names, but if you look those up, you will find it. You can buy them for a few pounds. I ordered one the next day.

Having that Q&A made the evening more special as well – you don’t usually get that at the theatre! It made for a really nice relationship between the creators of the play and the audience, a feeling that we’re all together and understand each other.

Plus I got to meet Rhi afterwards – thanks to Sonia, who introduced me, otherwise I would have been too shy to approach her. I was thrilled, it was like meeting a celebrity for me. And maybe she didn’t notice that I stared at her dress a lot, which had an interesting pattern of black-and-white shapes on a green background. Maybe she did and didn’t care. Anyway, she was absolutely lovely.

So to sum up, it was a really great evening. I highly recommend the play. I heard that more performance dates were to be added, so if it’s going to be on anywhere near you, go and see it. For me there was the added thrill of meeting people I had only known online before. I left on a real high.

Kudos to everyone involved. I think you have created something really special and valuable.

Do check out autact.co.uk, which has all about the play, a picture which shows the magic rings toy I talked about, and even instructions on how to fold an origami duck.

Featured image is of a bunch of sleepy ducks, which I photographed at the Martin Mere Wetlands and Wildfowl Trust a few years ago.

8 thoughts on “An Evening at the Theatre”